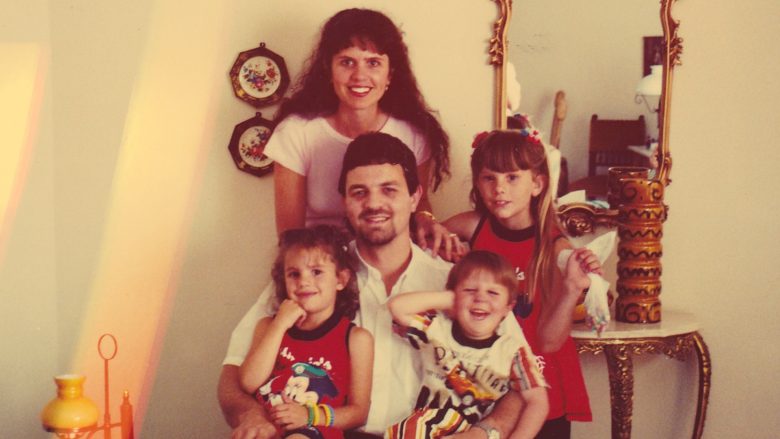 The relationship between children and their parents can be a complicated thing. Our parents are complicated human beings themselves. We are an extension of them, so that already makes us complicated as soon as we come into this world. We carry their DNA, their personality traits, their physical attributes. We can also end up carrying their wounds and their wisdom.

Parents are not perfect.

Let’s get that out into the open.

But no one is perfect, right?

Yet somehow we criticize and judge our parents more harshly than we do with anyone else. It’s almost as if there’s a measuring stick by which we hold them accountable, and the bar is so high that no earthly human being can get to that level. We expect our parents to be magical, able to do whatever it is that we need them to do.

Every parent has a certain set of values and traditions that they pass on to their children, knowingly and unknowingly.

Here is an example:

My parents did not allow alcohol in the house when we were growing up. At first, I thought it was because of the Scriptural verse in Ephesians 5:18 – ‘Don’t be drunk with wine, because that will ruin your life. Instead, be filled with the Holy Spirit’ – but later on, I found out that my grandfather drank himself to death.

Thus, my parents wanted to break that curse in our own house. As we started growing up, my father started to relax a bit more regarding alcohol, and eventually, he realized that the curse has already been broken. So the rules were adapted: We allowed wine and beer into our house; my sister and I enjoy a glass of wine every now and then. It has no stronghold on us, and we know when to stop and when enough is enough.

WHAT IS SUCCESS, REALLY?

I recently had a conversation with a friend of mine. She married young, already has three children, and is a full-time mother. She told me that she regrets not accomplishing more things before she got married and had children.

So I asked her, ‘How do you define success?’

This question stopped her right in her tracks, and she responded with, ‘You know what, I’ll have to think about it and come back to you on that.’

When we feel that we lack certain things in our lives, then quite possibly it can be because we compare our lives to other people’s highlights. My friend could be comparing her life with mine: I have won beauty pageantry titles, traveled the world, written books, been a motivational speaker, appeared on the covers of magazines, etc.

But… I could just as easily compare my life with hers: She has an amazing husband and partner, three beautiful children, she’s creative with cooking and making snacks for her kids, she has a warm, lovely home, etc.

Often we also listen to what the world says we need to have. These days it is not enough for a woman to just be a wife, mother, and housewife. No, she needs to have her own career. She needs to go to ‘work’ every day, and bring home the bacon… Because the ‘work’ at home can’t really be measured as ‘successful.’

There’s nothing wrong with a woman having ambition, dreams, and goals, but I often wonder:

What voices are you listening to?

Do you compare your own life with others?

What would make you happy: a family or a career?

Can you have both at the same time?

Or do you need to choose?

HOW OLD ARE YOU, REALLY?

My parents married young; my mom was 19 and my father 21. My mom already had three children before she turned twenty-seven. I remember my father being busy, always working in his office, visiting people in their homes, preparing sermons. My mom raised us – my sister and I especially (my brother is a different story).

I have an uncle who’s a lawyer and he only first got married at the age of 40. His wife was 23 and they had four children within five years. By then my uncle was settled in his ways and he didn’t have to work so hard anymore to ‘prove’ himself or try to be a ‘success’ in his field of work. By then he was able to relax more and just enjoy his children. These days you hardly see him in the office; he’s always on the road with his kids, taking them to hockey tournaments.

I remember a brief conversation that I had with my dad. He said, ‘There is one benefit to getting married later in your life: you get to enjoy your children more.’

I don’t know if my father regretted not having been more involved when we were kids, but this is the way it usually is with young adults: they want to prove themselves to themselves, and the world.

I even had a similar conversation with my mother recently: my mom and I were in the kitchen, and suddenly she looked at me with tears in her eyes and said, ‘I am sorry that I didn’t play with you more often.’

IS IT THEIR FAULT, REALLY?

Eventually, she became a mother herself.

And then she understood:

Her mother was also just a person.

Because now she could see that she was making mistakes as well, with her child.

And that parenthood really is all just grace and forgiveness and trying again.

So she chose to forgive her mother.

Because this is the truth: No one is perfect.

ARE YOU THE VICTIM, REALLY?

It is quite easy to blame others for the mistakes and faults we made in our own lives. Because that means we don’t have to be held accountable for our actions. Our parents are usually the ones closest to us for a long time. Yes, they make mistakes, some of them truly horrid mistakes.
But somewhere along the line, we have to stop and think:

Do I still want to be the victim in this story?

I believe we choose the narrative we tell about our stories. It’s easy being the victim; it’s hard to forgive and say, ‘I probably deserved better, but now I choose to let go and build a new life for myself.’

What’s the story you’re telling yourself, about your life and who you are?

WHO ARE YOU, REALLY?

I lived in the US for nine months, and for the first time, I had the opportunity of living by myself. Up until then, I had always lived with my parents.

For the first time, I felt like I was starting to think for myself, by myself.
I had no parent to influence the way I was viewing myself and the world.

And I realized that there are some things that my parents believed, some things my parents did a certain way, some choices they made, that I do not agree with.

It doesn’t make me a bad person, a rebel or even disrespectful.

Because there are also certain things that they instilled in me that I am going to hold on to, specific values and morals that they taught me, that I completely agree with. I want to pass it on to my own children one day.

I am simply becoming my own person.

I am becoming me.

And that is a breath-taking, freeing place to be.