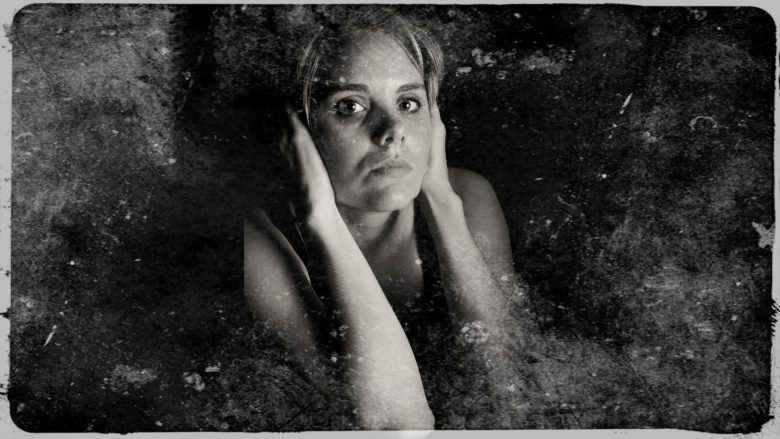 A few years ago I was the leading actress in a theatre play called ‘Kinders van Stilte,’ which was adapted and translated from the Broadway play ‘Children of a Lesser God’ by Mark Medoff.

In this theatre play, I had the role of Sandra, a 26-year-old deaf woman who refused to speak like a hearing person. She stubbornly instead chose sign language as her means of communication.
In this story, she falls in love with a speech therapist (which was played by Zane Meas of 7de Laan), who tries to no avail to get Sandra to speak and use her voice.

It then comes out that hearing men sexually abused Sandra and used her for sex, which is why she chose not to speak ‘with her voice’ anymore and to rather be angry with the world, hearing people especially.
The photo above is a demonstration of Sandra’s pain, frustration, and fear. She chose to block out the rest of the world’s voices and noises. Instead, she climbed back into her safe world of silence, isolation and sign language.

When I was a small kid, my mom used to repeatedly warn my sister and me to avoid dark, narrow corners.
‘Wherever you go, whenever you’re alone, don’t go where it’s dark. Stay away from the dark corners. Especially those long corridors.’

She would then explain that there are men who wait in the darkness, wanting to hurt us. She painted quite a vivid picture in our minds and up to this day, I avoid those dark, narrow corners and corridors at all costs.

In those days, it most probably saved my sister and me from traumas.

These days, it is not as sufficient anymore.

it’s not just the dark corners and corridors that are now scary.

If we were to be brutally honest and talk to the women in our lives, we would be shocked to find out that almost all of us have a story with sexual assault, unwelcomed advances, molestation, or even rape.

My sister who’s had unwanted advances from married men whose kids are in her class at school.

My mother who attended a school camp and one of the male teachers touched her bra strap repeatedly. Another guy gave her a lift somewhere and wanted to have sex with her. She was still in high school and he was much older than her. She said no, but felt dirty and ashamed about it afterward.

My grandmother who had a family member visit her at her home wanted to have an affair with her, and despite her saying no a couple of times, he kept trying his luck.

My friend who had a moment of weakness, became drunk and then her boyfriend raped her.

When I was 12 years old, I had an uncle who kissed me on the mouth and then forced his tongue down my throat. He laughed and then said, ‘Isn’t this a funny trick?!’

At the age of 18, my former youth pastor wanted to ‘court’ me and continuously sent me letters. I used to be under his leadership years earlier, and he used to talk down on me, try to break me down and said that there is no place for women in leadership. I wrote him a letter back, politely declining his advances, telling him I’m not interested. Then he sent me a letter which he wrote in anger and scratched out most of the sentences with a black pen. My father said, ‘This guy is not worth someone like you.’

Later on, I had two guy friends who were ‘interested in me’ but didn’t want to commit to anything. To my surprise, I found out that they had both been secretly engaged to other women at the same time. They took advantage of me by manipulating me emotionally.

I had an ex-boyfriend who laid next to me on my bed while we watched television. I asked him to hold me. He did, but then he started squeezing me tightly until I couldn’t breathe. He wanted to show me ‘how strong he could be.’ I panicked, knowing that I couldn’t break free. He was too strong for me. I said, ‘Stop it! I don’t like this!’ But he kept holding on for quite some time. For a split second, I felt unsafe and very much sure that he could easily rape me, as we were the only ones in the house.

Finally, he let go of me. But I didn’t trust him anymore.

It’s not safe anymore for children, either. Maybe it’s been that way for a long time, maybe it’s only coming into the light for the last couple of years.

We are living in the information age, which means pornography is at our fingertips.

Or is it because we live in a fatherless generation? Divorced families, absent parents.

*
When you’re a pretty and attractive person like me, men tend to check you out everywhere you go. At the mall, shopping centers, the gym, etc. Anywhere and everywhere. And yes, it is not just single men that do that – it’s the married men who do it even more so.

And they will do so with their wives by their side.

I have this theory about married men: If they notice you the first time and check you out once, it’s normal (what heterosexual man won’t notice an attractive woman? especially if she’s blonde).

If he checks you out for a second time, then the red lights blink once. It says to me that the marriage is already in trouble. And I am not the problem.

If he checks you out for the third time, then chances are good that he’s already cheating on his wife.

This is just my theory. I could be wrong, but I stand by it and have had my experiences in this.

Just a couple of days ago I got a message from an anonymous person. My mouth dropped open when I read it.
This woman was commenting on one of my previous essays – ‘Regular Old Moon’ – where I wrote about my season of singleness and why I am grateful that I’m not married with kids yet.

This was her message to me:

I think the real reason for “celebrating” singleness is to hide our shame. No lady wants to be single – if she could marry in college or in her 20s she would have jumped at the chance.
For some, they may have set their sights too high, rejected nice men because they thought they could do better, others maybe were too timid, or lived in areas without many faithful men.

Here is my response:

First of all, shame is not from God. It is abnormal to feel shame about anything. Shame is a spiritual force put upon us by society and through what they say or do to us.

As for the rest of this woman’s message, she is so off the mark that it’s almost embarrassing to address it.
Instead, I will introduce you to this fabulous woman. Aged 33, she is still a virgin, doesn’t compromise on her core values and refuses to ‘settle’

There’s been a revolution rising in the hearts of women in the last couple of years. And that makes me excited for things are headed. We are all created equally.

First, it was #MeToo, where women all over the world started sharing their stories of sexual assaults and sexual abuse.

Then it was #TimesUp, where US women are declaring that it is time for them to start earning the same amount of salaries as men.

And this past week, here in South Africa, it’s been #AmINext, where women are saying that enough is enough when it comes to rape, sexual assault, and murder against women and children alike.

Women are finally on their way to claiming their rightful places in this world.

It is going to take time for things to be equal, but it’s finally happening.

May this song be an anthem for women everywhere:

In my life – so far – there’s only been a few good men. There’s only been two specific men that make me still believe that there are good – no great – men out there. It’s hard to find them; they are few and far between.

The first one was my father.

My father was a good man. He was kind, considerate, always willing to help. Not once did he tell me I couldn’t do something because I was ‘a woman.’ He believed in me and supported my dreams.

The second one is Richard Gordon.

Richard is a pastor at Bethel School of Supernatural Ministry. His wife Libby Gordon is a powerful and strong woman, a giant in the spirit. She has a calling on her life and she stands head and shoulders above all the leaders there.

And despite all this, Richard is always there supporting his wife, cheering her on, championing her. He knows his worth, he knows that his wife is worthy of standing next to her, and not once does he bring her down or try to minimize her. It’s amazing to watch their relationship.

These are the few good men that have been in my life.

The women’s revolution has begun.

When will the men’s revolution take place?

When will the good men stand up, and take their own rightful places?